You are here: Home / About / Coach – Fiona Ford 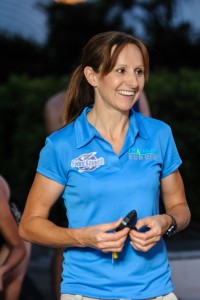 Fiona began coaching in 2006, setting up a Summer training camp in the French Alps for athletes preparing for the World Championships in Lausanne, Switzerland. She mentored fellow GB age group athletes during the period of her European and World Championship wins 2004-2006 and implemented her coaching approach with a range of triathletes from first timers requiring extensive technical input to experienced performers looking for a world-class edge to podium at international events.

In 2007 she founded the company Triathlon Europe and gained coaching qualifications through the British Triathlon Coach Education program, Levels 1-3. In 2010 she became qualified as a Level 3 BTF coach, and began honing her coaching practice to use technology effectively to enhance training analysis and planning fused with a depth of understanding of triathlon training progression for individual athletes.

Fiona has been a full-time triathlon coach since March 2010, giving up her work as an Educational Consultant for SMART Technologies. She coaches triathletes of all abilities from Sprint and Olympic distance through to Ironman. Fiona draws upon her personal experiences of a decade in the sport as an athlete, including being herself coached by the legendary Steve Trew (Sydney 2000 Olympic games Triathlon coach) and Spencer Smith (multiple World Champion). Her athletes range from first time and competitive age group athletes to sub-10 hour Ironman finishers.

Fiona ran a highly sought after Swim Smooth squad in South West London for a decade and is one of a small number of specialist Swim Smooth Certified coaches in Europe. As one of a select group of highly trained coaches, she offers high-quality Swim Smooth Video Analysis services alongside her online coaching and sports nutrition services.

Fiona has established her Olympic distance and Ironman specific training weeks in the French Alps over a decade of honing altitude training methods to successfully peak for world class performances at major events. Her focus on developing a high-quality training program involves guests such as Spencer Smith joining the coaching staff on the French Alps training weeks.

Fiona worked with and was filmed for National Geographic on TV programs coaching specifics of the underwater swim stroke in the series ‘How to Win at Everything’. As one of the regular coaches for Global Ride, Fiona’s coaching commentary features on both their Italy and France DVD series, filming and recording at various locations and recording coaching voiceovers for cycling training sessions. Her company Triathlon Europe worked exclusively with Global Ride to produce the France DVD’s, including triathlon specific cross-training elements and all group riding footage.

Fiona has worked with a range of medical therapists, including physiotherapists to develop their CPD program with specific triathlon seminar workshops. She also provides triathlon technical training days, weekend workshops and expert talks for British Triathlon CPD days, Corporate groups and partners such as Phyio4Life.

In 2015 Fiona worked with a range of media to provide radio, magazine and newspaper interviews as well as filming content for television programs such as ‘How to Win at Everything’ on Discovery Channel UK. Fiona’s first book, ‘Back on Track’ was published by Meyer & Meyer in October 2015. Her book provides a guide for endurance athletes managing their recovery from serious and/ or multiple injuries applying a multi-sport approach to make a successful and full recovery.

Fiona spent 3 years recovering from a serious road traffic accident whilst out bike training in Surrey in the Summer of 2012. This cut short her expectations and ambitions to continue racing in the Pro ranks at Ironman distances as she had been doing from 2009 to 2012.  After a long rehabilitation and recovery period involving learning to walk again, Fiona has successfully resumed her triathlon training and made a comeback to racing in Summer 2015. She won her age group at Windsor Triathlon by 12 minutes after being away from the triathlon race scene for more 4 years. In 2016 Fiona’s comeback culminated with age group wins at Challenge Salou, Ironman Maastricht, Ironman 70.3 Western Sydney and a podium finish (3rd) at the Ironman World Championships in Kona, Hawaii. Fiona’s recovery journey was featured in the book “Rebound’ published in 2019 by Cindy Kuzma and Carrie Jackson Weadle, focusing on how to train the mind in recovery from serious sports injuries. She has also been interviewed by the BBC for radio programs on Radio 4 and Radio Scotland to share her inspirational story, including Bob Babbitt after the Ironman World Championships in 2016.

She continues to enjoy developing her coaching businesses, educating and developing new coaches and inspiring all of her athletes to find a balance of lifestyle and commitments with their triathlon ambitions and physiological potential to be the best version of themselves. Fiona recently completed her 2 year MSc in Applied Sports Nutrition, conducting research into periodisation of carbohydrate intake in triathlon to improve performance.